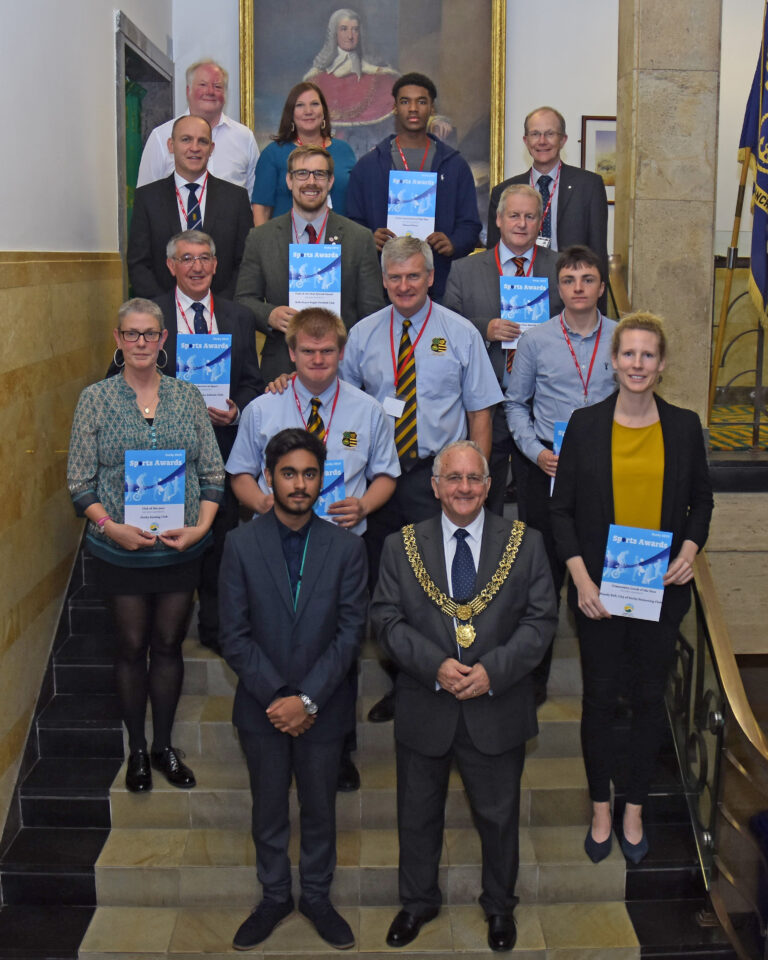 TWO members of Derby Athletic Club, one a junior and the other a senior official, took honours at Derby Sports Awards on Thursday Oct 10. Seventeen-year-old javelin thrower Hannah Barnden was Junior Sportswoman of the Year, while club chairman Barry Parker, the oldest winner at 72, took the title for Lifetime Service.

Originally a heptathlete, Hannah decided last winter to drop multi-eventing and concentrated on throwing the javelin instead. This paid off, with Hannah winning gold for England in the Youth Nations Cup in Dublin in August this year.

In the last 20 years he has been an accomplished international athletics official, a regional co-ordinator of athletics and training, and the chair of Derby Athletic Club, overseeing growth and efforts to engage with the community. He has put on additional meetings and opportunities for young people and those with disabilities.

Another club also had double success at the event which was organised by Derby City Sport Forum and held in the Jacob Rivers VC Suite at Derby Council House.

Eighteen-year-old Sam Remer of Derby Rowing Club took the title of Young Sports Leader for his voluntary efforts to recruit new members and coach them, while studying for his A-levels, winning at regional and national level competitions and competing at Henley Royal Regatta.

His club also took the title of Club of the Year. As well as providing pathways for individuals of all goals it has recruited more than 100 people to rowing over the last 18 months.

Two other clubs, Rolls-Royce Rugby Football Club and Mickleover Sports, won special awards from the judges in that section, particularly for their work in the community

Rolls Royce RFC renovated their clubroom, introduced 02 Touch Rugby allowing people of any gender, ability or fitness level to get some intense exercise, and held its biggest ever annual sevens tournament with 185 players. This raised more than £300 via a cake sale for charity,,and some members gave blood.

Mickleover Sports Club touched the lives of 20,000 people in the last year through its numerous football and cricket teams – many of them for youngsters – and various community events. Over the last three years it has raised £23,000 for Our Mickleover, the local community association as well as funds for itself.

Another rugby club that scored success was Derby Bucks Mixed Ability Rugby Team, which picked up Team of the Year. Based at Derby Rugby Club and starting only September last year they were the first mixed ability team in the East Midlands with participants who have disabilities playing contact rugby together with others.

Among those with disabilities are people with cerebral palsy, profound deafness, learning difficulties and ADHD, Following their success the RFU are looking to spread mixed ability provision across the rest of the region, and the team has applied to enter a tournament in Ireland next year.

Youngest winner on the night was 16-year-old basketball player Simeon Perry, Junior Sportsman of the Year, who helped his club, Derby Spartans, win their Under 18s league title and promotion.

Simeon played for GB in the International Basketball Federation Under 16s Championships at Montenegro in August. Despite a knee injury he successfully earned ha is team the winning point. He is also a role model, promoting his sport and inspiring youngsters. He now studies at Charnwood College, Loughborough.

In contrast, Community Coach of the Year winner Mandy Bell, head coach at City of Derby Swimming Club for the last three years has considerable experience and success, with 16 swimmers in the British Summer Championships. The club has also helped charities.

In July Mandy was the GB coach for the 2019 European Youth Summer Olympic festival in Azerbaijan and she has now been chosen to participate in the Coach 2024 programme, supporting the next generation of elite swimming coaches.

The junior winners were also given an annual Leisure Pass courtesy of Derby City Council.

Forum chair Ian Cotter said he was slightly disappointed that, unusually, there were no nominations in some classes, particularly sportsman and sportswoman.

“But we had excellent entries in other categories and the judges were particularly impressed by some nominations,” he said

Awards were presented by the Mayor of Derby, Councillor Frank Harwood, and the Youth Mayor, Abdul-Moiz Siddiqi.

The MC for the evening was Kevin Palmer, Vice Chair of Derby City Sport Forum.