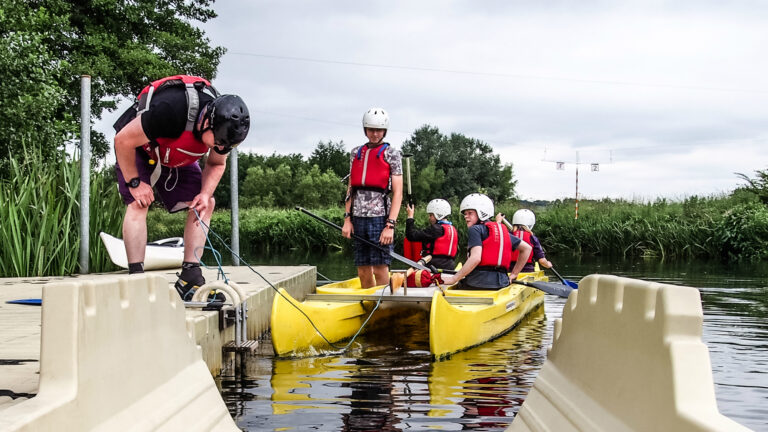 The Midland Canoe Club was lucky to avoid serious damage and losses in last Friday’s floods. Club president John Chamberlin was down at the site at around 2.00-2.30 p.m., along with two other members, and the photos below will give some indication of the river level. However, that was when the Environment Agency’s estimate of the river level in ‘Derby City’ was that it would ‘peak’ just after 2.00 p.m., and at just over 2M.

Their subsequent estimate, however, about 2 hours later, suggested that it would now peak at ‘3.48M’ at 9.00 p.m.’ that night (later revised to 10.00 p.m.); i.e. well over an extra metre! This meant that (unless there was some divine intervention) the club would be very likely to lose its pontoons-based launching facility (there was barely 6″ of retaining ‘poles’ above the pontoons at 2.20 p.m.).

John reported this likelihood to the EA Incident Line (Incident no: 1752818), because if it happened, there was a real possibility that the pontoons would be carried downstream and could cause serious damage to the ‘1853’ toll bridge.

Of course, they hoped this might not happen: there is flood plain opposite the MCC site, so the hope was that the river’s ‘width’ at that point might offset river’s ‘height’, but at the time that felt like clutching at straws.

If you look at the first photo’ you will see what the pontoons normally look like – i.e. with a lot of the steel retaining poles sticking out above the deck – then look at the following pic’s to see how little was sticking out as the afternoon and evening wore on. Not very much!

The later pic’s (in the dark) were taken around 8.45-9.00 p.m., and on one you can just make out the tip of a pole (ringed) just above the pontoon deck, with still about an hour to go until the projected ‘peak’. In the 2nd & 3rd pic’s, you can just see the tip of the pole in the life-ring.

In the event, the river rose in excess of a further 1 metre in Derby City, but only by approx’ 150mm at the MCC site, so the pontoon structure held. Apart from most of the site being under water, the new clubhouse was not reached, and the main damage was to the club’s launching ‘slide’, but this was due for an upgrade anyway. Phew!