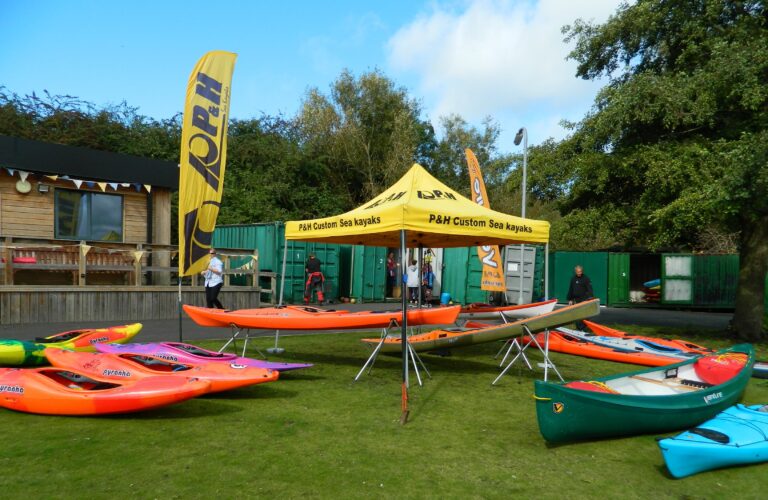 On Saturday 28th Sept., the Darley Abbey-based Midland Canoe Club held an Open Day to celebrate the completion in February this year of its recent projects to make the whole site wheelchair-friendly.  The work coincided with Derby City Council’s own resurfacing work along the access track to the club, and it also benefits the users of the Darley & Nutwood Local Nature Reserve, plus members of The Earl of Harrington’s Angling Club with some new, wheelchair-accessible fishing pegs.

The Midland Canoe Club – one of the midland region’s premier clubs, currently having 200+ members – was formed on Sunday, November 11th, 1951, which means that in six weeks’ time it will be 68 years old.  For most of the club’s first two decades it was based at Trent Lock, Long Eaton, behind what was then the Fisherman’s Rest pub, until the brewery decided to redevelop the site into what it remains today, the Steamboat Inn.

Midland CC then came to its current site on the bank of the River Derwent, upstream from the toll bridge in Darley Abbey, in late 1972, some 47 years ago, after the Derwent Sailing Club weighed anchor and moved to Swarkestone, following a fall in the level of the river.

The current clubhouse – the third on this site – was erected five years ago, in 2014, formally opened in 2015, and is the first one to have wheelchair access into the building, plus its showers and toilets.  Since then it has been an aim of the club to make the site itself wheelchair-friendly too, and phase one of that was completed in 2017, with partial resurfacing plus additional launching facilities for those with reduced mobility, enabled by funding from Sport England.

Phase two was to finish that resurfacing, and this was completed in February of this year, match-funded by the club itself and a grant from the National Lottery’s Awards-4-All fund, for which the club is extremely grateful.

With the resurfacing of the main access track, which was completed in late July, this has now given the area wheelchair access, right from the Old Lane toll bridge in Darley Abbey.

The event was open to all, and the club’s coaches were on hand to help newcomers who came down for a try on the water, with some joining as new members.  The event was also attended by national governing body British Canoeing’s Chairman, Professor John Coyne, plus Darley Ward’s Councillor, Lisa Eldret.  Local manufacturer P&H Sea Kayaks from West Hallam had a display of kayaks, while Viking CC’s Canoe Polo team gave a demonstration polo match on the water.  The bar and liquid refreshments were supplied by Derventio Brewery, from just across the river, and musical entertainment in the evening was provided by the very popular Alan Perkins Folk Trio.

A founder member of the Derby City Sport Forum, the Midland Canoe Club is a family club, catering for all aspects of paddle-sport, including canoes, kayaks and stand-up paddleboards (SUPs), with members paddling on inland waters and the sea.  Thursday evening club-nights are now drawing to a close for this season, but the club also meets on Wednesday evenings in Queen Street Pool.  Anyone interested can contact the club via its website: https://midlandcanoeclub.com/new/index.html#contact.

Here are a few photographs of the event –